Women We Can Achieve a Lot Becoming an Exemple to Others.
Reflections from Nepal

“Mahila” was screened on Womens’ Day for the project beneficiaries at Opportunity Village, Nepal and some others from outside also joined, who watched the documentary with interest and learning attitude. The film was well captured and highlighted the women empowerment’s in the rural areas. The attendees also got the inspiring that as a “Women we can achieve a lot with the positive attitudes of doing something different and to become an example to others“.

The true stories of the women in the documentary film were inspiring and had a learning message of empowering one with the opportunities provided to them. The participants also reflected on the situation of the women in the society. Many NGO’s are involved in the issue of women in creating a just and equal society. The government also is taking interest in the issues of the women. There is lots of effort is taken in the national and local level but still a strong step need to take in advancing the rights of the women. In the political scenario many women candidates are given opportunity and they are been elected in the local and national level government post.

As it was reflected on their own rights as the women, the participants felt that they are aware of the violence and the exploitation of the women in the also in Nepalese society and even at their work place. They are able to speak out against the violence and raise their voice for justice for themselves and also for the others. They are happy to be women and like to contribute in creating awareness and a just and equal society. 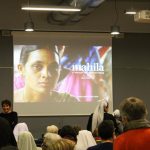